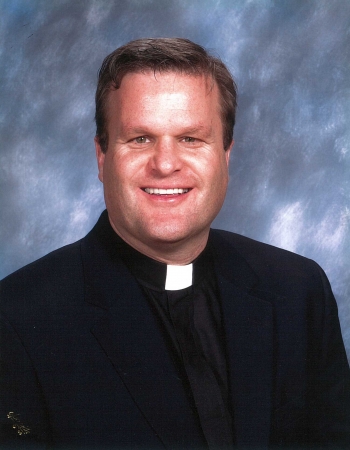 Rick was raised in Denver, Colorado, and was active at St. John’s Episcopal Cathedral.  He graduated from the University of Colorado, Boulder, with a Bachelor of Arts in Economics, in 1989.  He worked for four years as a Director of Youth Ministries at St. Michael and St. George Episcopal Church in St. Louis.  He has served in youth ministry, either as a volunteer, part-time, or full-time, since 1985.  He worked in the banking industry for three years before going to seminary.  He graduated from Virginia Theological Seminary with a Master of Divinity in 1998 and was ordained as deacon and priest in 1999.  Rick served in two churches, in Colorado and Virginia, before becoming rector of St. Mark’s Episcopal Church in Cheyenne in 2005.  He is married to Caroline, has two daughters, Elaina and Lucy, and one dog, Sophie.  Rick loves to read, ski, golf, run, do yoga and play tennis.